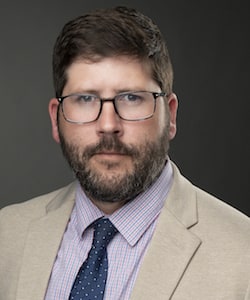 Understanding. Knowledgeable. Accessible. Unafraid. These are the pillars upon which Jose Noriega has built his highly successful criminal defense practice.

A native Texan, Jose graduated from Texas Tech University with degrees in psychology and political science before attending law school at Western Michigan, where he earned his Juris Doctorate in 2009. After stints with the Dallas City Attorney’s Office, the Dallas District Attorney’s Office, and the Dallas County Public Defender’s Office, Jose opened his private practice in Plano in 2010. He joined Guest & Gray as a senior associate in 2018, with 95 percent of his practice concentrated on defending those accused of misdemeanor and felony offenses. Half Hispanic, Jose Noriega is bilingual in English and Spanish.

Aggressive at trial and laid-back but effective during negotiations, Jose has taken numerous criminal cases to trial with successful results and mitigated the punishment in countless more, saving his clients the stress and expense of trial. While he concedes that nothing beats a “not guilty” verdict, Jose is committed to getting the best possible deal for each individual he represents and ensuring that every client receives the inalienable right of presumed innocence, particularly in a conservative county like Kaufman. He is especially passionate about protecting the records of youth, who have their entire lives ahead of them.

Upfront and responsive, Jose believes communication is key, and his natural ability to put his clients at ease and effectively communicate convoluted legal terminology and processes empowers and educates each person he represents. A testament to his professionalism and expertise, Jose has consistently been rated a Super Lawyer by his clients and peers for consecutive years beginning in 2014.

A diehard Dallas Cowboys fan, Jose lives with his wife and two dogs in Plano.