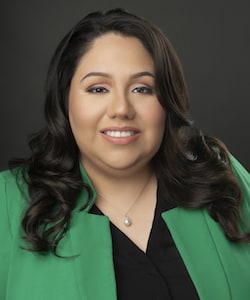 “A law degree is like a superpower. You have to use it responsibly.”

Election, and complex civil litigation attorney Elizabeth Alvarez loves fighting for the underdog, whether it’s a landowner facing annexation, a candidate for public office who has been cheated in an election, or victimized women in Africa.

An expert in the highly specialized field of election litigation, Elizabeth’s election law practice focuses on ballot contests, ballot challenges, recounts, and election contests, where her accuracy and ability to act quickly within the short time frames inherent in election law are invaluable. A tenacious and gifted litigator, particularly when representing large business owners, she excels in court thanks to her calm demeanor, keen memory, and ability to think on her feet.

Elizabeth is a board member of the Equal Voting Rights Institute as well as a board member of Christian Homes of Abilene, a Christian adoption agency. She is also a member of the Republican Lawyers Association and the Federalist Society. A passionate defender of those victimized by society, Elizabeth works1000 pro bono hours per year, usually focused on children or asylum, including representing the unaccompanied immigrant minors from Central America during the 2014 American immigration crisis.

An avid knitter, reader, and cat mom, Elizabeth enjoys traveling with her husband—often to visit locations she has read about such as Stephen King’s Maine, 221B Baker Street in London, and the home of Anne Rice’s Lestat in New Orleans.

Christian Homes of Abilene
Board Member

Professional Experience
Practice Areas
Client Reviews
★★★★★
Guest and Gray law firm is wonderful. I have had the chance to work with three of the lawyers and they all have been wonderful. They will tell you when you need a lawyer and when you don't. They actually try to save you money. They respond very fast to questions and try to help you understand what is going on. They are caring and are really judgment free. If I needed a lawyer again I would use this firm in a second and recommend them. K.K.
★★★★★
I used Guest and Gray to deal with my ex wife's accusations of child neglect.I dealt with Robert Guest and Tracy Gray. Both were excellent attorneys and surpassed every expectation I had in fighting the false accusations. We Won ! M.B.
★★★★★
I used Guest & Gray for a child custody case and they were great. I was really nervous about the case but they took care of everything and answered all my questions. I would recommend their services to anyone. J.R.
★★★★★
I can highly recommend Guest and Gray. I have worked on a number of cases with Robert Guest and and Scott Gray and find it amazing how MOTIVATED they are to do everything they can for their clients, not to mention that there superior knowledge, etc. In criminal cases supportive relatives always want to know "what can I do" to help. Hire Guest and Gray.﻿ C.S.
View More
Submit a Law Firm Client Review